By Richard Heggie on 21 February 2012 in Uncategorized 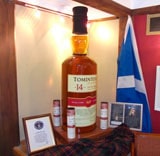 This week, we learn in The Herald that the water of life may be heading down the same plughole as the black gold. In a recent book, Scotland’s Economic Future (Ed. Sir Donald Mackay), Professor John Kay sets out some home truths on the value of whisky to Scotland’s economy.

80% of the industry is owned by foreign companies. Only 2% of the global value ends up in Scottish pockets. A £25 billion worldwide trade, somewhat detached from the romantic myth.

Also this week, Donald Trump gave Alex Salmond a verbal comb-over on the Scottish Government’s support for off shore wind farms. Ironically, Trump seeks to protect Scotland’s precious coastal environment. Pot? Kettle? That aside, he may have a point in his claim that the nation stands to lose control of its renewable resources.

Closer to home, Peckham’s, our local Bruntsfield deli, has been taken over by Sainsbury’s. The constrained dimensions of the shop suggest a new lower level has been added to the supermarket hierarchy – the Sainsbury’s Micro. (What next? Tie Rack folds and their outlets are filled with hundreds of Tesco Nano stores? The ASDA market stall?)

As for town planning, public interest has become a marginal issue and we’ve surrendered influence over our most valuable social assets – our communities. The notion that towns are for people is now an urban myth. Planning by house numbers, retail impact assessment and share price continues unchecked. Thankfully, other approaches are gaining ground, supported by an increasingly well-considered policy framework at Scottish Government level.

For example, next week, I’m talking to a group of eager town centre practitioners about Whole Town Plans. The concept focuses on town centres but recognises the interconnected nature of land use, life and business. It promotes partnership thinking and action between public agencies, community groups, local people, businesses and investors. It involves planning, but not as we’ve known it.

The Whole Town strategy brings new hues to the blocks of brown and purple tones we simplistically paste onto swelling settlements. It asks us to think harder about where development should take place and how it might deliver wider benefit. It acknowledges the complexity of urban life and the need for collaboration.

Above all, the Whole Town approach offers us the chance to reconsider the value of local assets and opportunities and make judgements on resource allocation. In other words, to plan communities which facilitate new house building and prosperous businesses but also a better quality of life for their residents.

Being only part cause and part effect, Planning can’t single handedly transform society. The biggest factor in driving change might be the collapse of the myth that the debt-driven consumer boom was sustainable.

Now would be a good time to ask, are our towns machines for creating GDP, or is GDP a tool for delivering sustainable towns and communities? It’s our choice.

Either way, a line has been drawn in the sand.

“Always carry a flagon of whisky in case of snakebite, and furthermore, always carry a small snake.” W. C. Fields, comedian and juggler (1880-1946)