By Richard Heggie on 22 November 2010 in Uncategorized 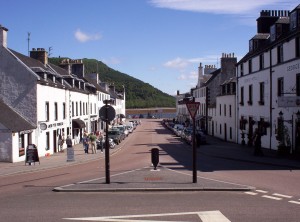 For decades, we’ve been fiddling while our towns burn. Suburban sprawl, out of town retail parks and supermarket chains are draining away local identity. As Gertrude Stein once said, “when you get there, there’s no there there”. Now, with the investment and construction industry hamstrung, the rate of development has been reined back. We have an opportunity to take stock. What kind of towns do we want?

Writing in The Scotman recently, award-winning architect Malcolm Fraser and Chief Executive of the Edinburgh Chamber of Commerce Ron Hewitt offered polar perspectives in response to Murray Estates’ proposed ‘Garden District’ to the west of Edinburgh.

Fraser sees a cuckoo development fooling the planning system into accepting dispersed growth of the city. He celebrates urban living and the vibrant, civilised culture that Edinburgh so vividly epitomises. He sees abundant opportunity within the city boundary.

In contrast, Hewitt embraces the prospect of counter-recessionary investment and construction. He sees bricks, mortar and jobs on green belt land. The market doesn’t want brown field urban sites, he argues, so we must strike out west across the frontier of the City by-pass.

It’s a spat between high ideals and the bottom line. In this fight between Malcolm Fraser and Ron Hewitt, who will win?

It’s important to understand that development of our towns is driven by both the public and private sectors. Most new development is undertaken by the private sector: house builders, retailers, property investment companies. Government and the public sector act primarily through policy, regulation and service provision.

So, our towns are public-private hybrids. Are they failing because of private sector actions, public interventions, or both? The profit motive will always drive large commercial enterprises. We need to accept this and target our interventions to guide the market, instead of tailing along after it, cleaning up the mess. The starting point is value judgement.

For example, supermarkets like Tesco and ASDA justify new stores by proving that trade is leaking away to surrounding towns which have better retail provision. Often it is their own aggressive expansion programmes which have created this imbalance.

Typically, local businesses will object, realising their survival is at stake. The new supermarket is inevitably built, often out of town. As trade is sucked out from the centre and local businesses fail, we belatedly divert public funds towards cosmetic town centre improvements. Our hanging baskets and benches rarely regain the footfall that is lost.

We treat local businesses worse than red squirrels! This well-protected species is typically driven out by its dominant grey cousin. We value the reds, therefore we cull the greys. Somehow, we got things back to front with supermarkets and small businesses.

During the Thatcher era, the ‘right to develop’ emerged as a slogan of unbridled capitalism. Regulation was relaxed as the planning system adopted a presumption in favour of development. There was, according to Thatcher, “no such thing as society”. The bland and soulless expansion of our towns gained momentum.

Today, the Scottish Government has higher ideals, expressed through an over-riding ambition for sustainable economic growth: a mantra now also adopted by the UK coalition Government. That’s subtly different to a ‘right to develop’. More accurately, it is the right to undertake the right kind of development.

The Scottish Government has also established mechanisms to guide public policy and investment through Single Outcome Agreements, National Outcomes and the National Planning Framework. So far, so good. Now, we need to apply these ambitious goals more widely. Why shouldn’t we demand that private development contributes more directly to a civilised society? Our towns mirror our society. What came first, sedentary lifestyles or an expanding road network? Did price-conscious mass consumerism drive the growth of supermarkets, or is it the consequence? The truth is that our dumbed down society has built dumbed down towns.

In asking what kind of towns we want, we should first consider what kind of society we want. The Scottish Government’s ambitions are a good start. If we choose to pursue a distinctive, outward-looking and expressive culture, we might achieve a suitably distinguished urban form. Our market interventions should be driven by our bright new aspirations.

Market intervention is an emotive term. For some years it has been portrayed as a threat to freedom. The market is sacrosanct: state and public sector dabbling is a dangerous game. Not everyone agrees.

In ‘Freefall’, the Nobel Prize-winning economist Joseph Stiglitz picks over the bones of the global financial collapse. One of the few prominent experts to predict the economic meltdown and now a Scottish Government advisor, he is crystal clear on the cause; unregulated markets are inherently unstable and will always fail; they are unable to provide beneficial outcomes for society as a whole. This applies equally to our financial markets and our towns.

We should never forget that Scotland has a rich tradition of urban living. We still have some vibrant, attractive and successful towns, such as Inveraray, St. Andrews, Haddington, Dornoch and Edinburgh. In reality, much of their continuing appeal is the result of intervention to protect their impressive historic buildings, streets and centres.

The danger is that mediocre development around the town edge ultimately dilutes and undermines the quality of the centre. Inverness is the obvious example of this phenomenon. It’s no coincidence that it’s been one of Scotland’s fastest growing towns in recent decades and is known disparagingly as ‘Tescotown’.

Ron Hewitt insists Edinburgh has no option but to expand into the green belt. How else can we accommodate all those new homes we need over the next 20 years? First, we must consider the extent to which housing ‘need’ actually means housing ‘want’. There is certainly a need for affordable housing but the volume builders have proven incapable of meeting this demand. More market failure. Releasing green belt land will not solve that problem.

Instead, it will serve bulk builders like Redrow Homes, which stated it will return to the ‘old model‘ of housing delivery as soon as possible. Boom and bust are two sides of the same coin: Redrow’s share price grinds along at 15% of it’s overheated peak. Even now, the deluded still think ‘heads’ will come up every time.

A new era needs a new response. Some are forging ahead. Writing in The Scotsman in June, Lesley Riddoch applauded the progress made by development trusts set up by local people to take control of diverse assets including community orchards, lochs, pubs, libraries, bridges and wind turbines. There are already 4-500 trusts in place.

The Scottish Social Enterprise Coalition’s most recent estimate suggests Scotland’s 3000 social enterprises have a £2.5bn turnover. That’s twice the budget of our largest city. Today’s Scottish Government budget statement ought to build the momentum by cultivating this maturing sector.

Recent changes to the planning system give people and communities a hand in shaping their towns. The Garden District debate stems from this process. Unfortunately, many developers still see consultation as interference.

It’s equally sad that, aside from the usual motivated suspects and NIMBYs, too many people still believe participation is futile. High profile cases like the Beauly-Denny power line, the Trump debacle and Aberdeen’s Union Terrace Gardens haven’t helped. Like low turnouts at elections, it’s another example of a dispirited society giving up on itself.

We need to re-energise our efforts our shape our towns by becoming shareholders in their future development. That way, we may appreciate the need to nurture our inheritance by demanding that development is both commercially viable and socially beneficial. Blaming the Government, the Council or the market is no longer good enough.